Gateway into my past 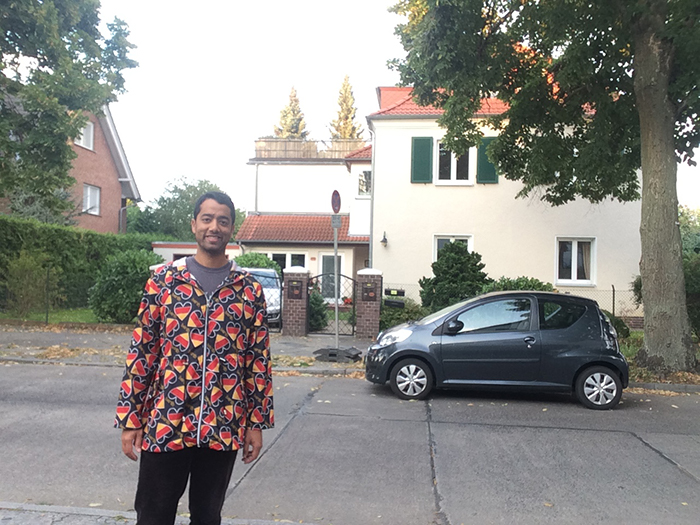 I looked up at the quaint German cottage, then down at my phone to compare the address:

Trekking into the suburbs during my last afternoon in Berlin, I arrived here to accomplish my final summer task.

This is the house where my grandfather lived in the late 1950s. Through my research into his life here, I discovered this address and decided I must visit.

I took a picture, and considered checking off my task as complete. 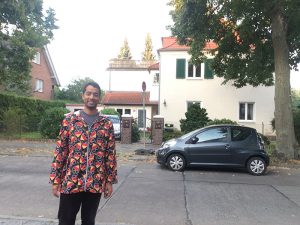 This is enough, right?

Proof I did it?

What if there’s more for me to discover behind this closed gate door?

In that moment, I experienced so much resistance.

It’s a familiar type of resistance:

The same kind of resistance when I’m on a sales call with a prospective client.

Or when I enter a room full of people and I know no one.

Or when I choose to initiate conversation with someone new.

The fear of the unknown can be daunting, heart-palpitating.

Standing in front of that gate, I asked myself a defining question:

If I turn back now, will I regret not ringing the doorbell?

So I took a deep breath, stepped forward, and pressed the doorbell.

Maybe I’ll be lucky and no one will be home.

A few moments pass, as I stand at the threshold.

Then out comes a kind-faced older gentleman with snow-white hair and a prominent mustache.

He must be wondering why a brown man is standing in front of his house on a random Thursday afternoon.

Before his kindness has a chance to fade into skepticism, I chirp a Guten Tag! and ask Sprechen Sie Englisch?

My go-to question in Germany.

He shakes his head no.

So then I begin delivering my measured phrases that I had practiced with my German friend the night before:

I come from the USA…

He listened, part-bewildered, part-amused, and said he’ll bring out his wife, who speaks better Englisch.

She says they bought this house in 1980, a good two decades after my grandpa lived there.

She knows nothing about an Indian man living there before.

I thank her, and then she adds one more detail:

We bought the house from a man who lives a few houses down.

A flicker of hope sparks inside me, but before it could grow any further, she says:

But he doesn’t speak any English.

As if to dissuade me from trying anything further.

I could go back home now.

Why push any further?

But the What if? question kept nagging at me.

I decide to push further.

Could you tell me which house, exactly?

She called over Mr. Nice Mustache to ask.

As if responding to my heart’s boldness to find any information I can, he offered to walk me over!

We walk three houses down the street, and a huge brown dog greets us with protective barks. 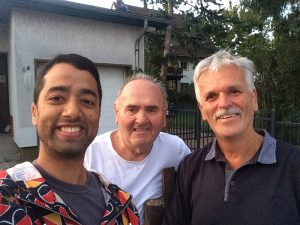 Finding Herr Schmidt, middle, who knew my grandfather in Berlin in the 1950s!

Mr. Mustache explains the situation on my behalf, that I’m the grandson of an Indian who resided in the house he sold them before they moved in.

Do you know anything about this man?

Mr. Mustache and I share a perplexed glance on why Schmidt is calling my grandfather by the name of a day of the week.

With Mr. Mustache acting as the go-between interpreter between Herr Schmidt and me, I gather that “Sunday” was the nickname Schmidt gave my grandfather.

(I guess his real name, “Sirajul”, was too difficult. I can totally relate to the experience of people wanting to call you another name because your name is too foreign/difficult/weird-sounding!)

I learn that my grandfather liked to drive on the Autobahn fast, so much so that Herr Schmidt appeared scarred from the memory of riding in the speeding Volkswagen my grandfather had shipped over from Bangladesh.

More than all the stories of my grandfather’s accolades that I’ve heard throughout my lifetime, I think this story is one of my favorites.

Somehow it’s so much more human.

Also, Herr Schmidt recounted visiting my grandpa’s room, and noticing no toilet paper in his bathroom.

“Well, of course. He was Muslim,” Mr. Mustache chimed in. “The water is cleaner than the paper, ja.”

I laugh, in nervous response to the validation of one of the most-indispensable aspects of The Muslim Bathroom, and to the fact that this was one memory Herr Schmidt chose to hold onto sixty years on.

Schmidt went on to note my grandfather’s crisp and well-dressed appearance. This I know from my family’s stories as well.

As the sun begins setting, Schmidt and I exchange contact info; he tells me he might have some photos of the two of them.

Then I wish him thanks, and goodbye.

In that moment, I feel like the purpose of my summer in Berlin had been fulfilled.

I felt a special, even sacred, level of connection to the past.

That my grandfather walked that exact same block sixty years ago felt surreal.

That I could see the window of the room where he lived.

Where he learned and mastered a foreign language well-enough to begin a PhD program in that language within a year.

I imagine his getting engrossed in a new language and culture, and feel that I can relate to that experience.

Learning about my grandfather from an outsider like this German man felt real on a totally different level than from hearing about him through family tales.

I experienced all of this because I didn’t turn back at the gate.

And am thankful for it.

What gate are you standing in front of?

Maybe it’s time for you to ring the doorbell, too.