The boy everyone gave up on 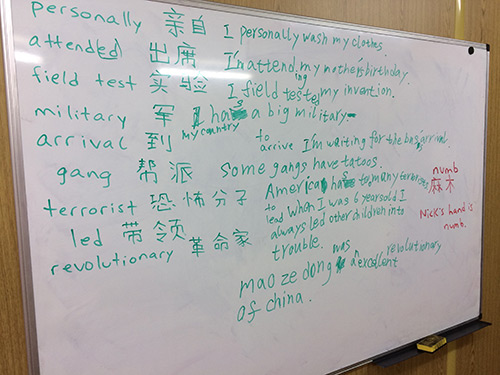 Greetings from Florida, where I’m ringing the New Year in with my family.

I’ve been away from the USA nearly six months and it feels so good to be back stateside, where everything is familiar again. 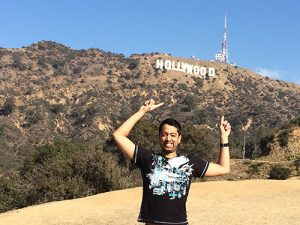 I took a side trip to visit sunny LA on my way back to Florida! The sun has been such a welcome change from the cold and dark Hungarian winter.

In my review process, I like to take a look at my highs (i.e. accomplishments) versus lows (i.e. shortcomings).

One of my highs was from teaching English to a Chinese student during my last few months in Hungary.

It was challenging but I learned so much. Here’s what happened:

The Boy Everyone Gave Up On

Sitting in the musty, tiny classroom in the outskirts of Budapest, I looked at my watch.

Frustration collects inside me, as I refocus my gaze on the novel I’m reading.

A few sentences in, I hear the door creak open.

Some apologies stream out as his winter coat comes off, and he sits down.

I have learned too well that it’s better to not ignore such strong feelings.

Why are you late today, Chris?

Something about oversleeping, late nights with friends.

All the voices from the other teachers and administrators echoed inside my mind:

He’ll never be on time.

He’ll never do his homework.

And he’s a bit slow.

For a new English teacher coming in, I didn’t have much in the way of optimism for my work ahead.

I decide to forgo the lesson I had prepared and get down to some fundamentals with Chris.

I explained this question to him, then pressed him to write his answers on the board.

One by one, he would articulate a reason, then write it on the whiteboard.

As we passed his tenth or so reason, his voice softened.

He looked at me, and told me about his fear of disappointing his mom, with whom he came from China to begin a new life here.

That was good, getting deeper — and I wanted more from him.

He began writing down a fear of looking stupid in front of his classmates.

These last two reasons felt the most vulnerable, as he finished filling the entire board with reasons why he should bother learning English.

Why he should bother prioritizing being on time for his lessons.

For me, it felt like a coaching session more than a teaching session, but I know that there is so much overlap in between those approaches, often indistinguishably so.

I was frustrated that I was getting up at 6 AM to make an hour-long commute across the city to meet with a student who didn’t care enough to show up on time or do the homework I asked of him.

I left the session unsure of the impact, if any, I had on him.

Expressing My Despair and Truth

Back at home that night, I wrote a LONG Facebook message to my coordinator and former Hungarian language teacher who had initially connected me to this opportunity.

When I met the principal for an interview, he was excited to bring me on to work with the new Chinese students who were struggling.

I was a bit nervous since my Mandarin was rusty, but with the coordinator’s encouragement, I accepted their offer to teach.

And actually, some of the students were great; they were engaged and doing their homework, and were progressing clearly.

In my recent journey, I have decided that I want to only work with clients who want to work with me.

Resolved on my own boundaries with how I want to spend my time and energy, I expressed to the coordinator that I expect my students to do their homework as a bare minimum.

When I was in the private tutoring world in NYC, this is the point where we (well, the tutoring manager) would have a serious conversation with the parents.

Working with students who don’t do their homework and who are unmotivated to show up on time is frankly not worth my time, I write to her.

I’m unhappy and exhausted, but this is my truth.

She replies immediately, unsure about if she understands everything I tell her.

A Turning Point and Realization

Facing the coordinator in the teacher’s room, I was ready to let go of this opportunity.

The long commute and days were wearing me out physically.

Working with students who apparently didn’t care about what I brought to teach them was killing my spirit.

Something had to give.

The coordinator, a woman a few years younger than me who is trying to make the impossible work for the foreign students in school, looked at me with concern.

Nabill, I just want to tell you what’s been happening with Chris.

Since you started working with him, he has begun to engage in class.  Before, he would never say anything, and just sit with a blank stare or only speak with his Chinese peers.

But now, he talks to the teachers.  He writes his homework.

He wrote a two-page English essay the other day, which is such a huge improvement from his usual efforts of at most a single paragraph.

I agree that he should do his homework. But I want you to know how much he has progressed already. Just give it some more time.

Suddenly, my shoulders and face relaxed.

Momentarily speechless, I was hit with the realization that my work was having an impact.

And a pretty big one.

So I thanked her for sharing that and left the teacher’s room, reenergized to continue my work with Chris.

Over the following months of working with him, he’s become one of my favorite students.

Our sessions are a safe container for him to express his truths and his passions, such as with basketball and singing – “the only two activities that make him happy”.

I just give him the tools and support to express himself in a less-familiar language context.

And after that Why Bother? conversation, he showed up late far less frequently.

Even one time, our roles reversed as he called me when I was running 5 minutes late, and asked me over the phone, “Where are you?”

I was pleasantly stunned at such a behavioral transformation from a student who until weeks ago had never used the alarm clock feature on his phone.

And the connection we forged is truly a special one, between trusted mentor and mentee. 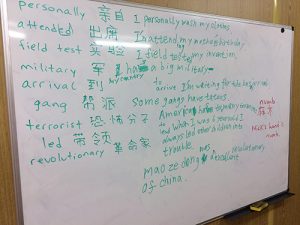 New English vocab I was teaching Chris from an article we read, and practice sentences he wrote. The Chinese translations above are in my handwriting, which Chris described as “cute”.

This whole experience taught me that sometimes there are enormous gifts waiting for us, such as the fulfillment of helping another human being in the unique way that only you or I can.

But we might have to wade through challenging emotions or experiences to reach them, such as doubt from yourself or cynicism from others.

Actual outcomes can be much different from what you had expected, but you can only realize what is possible with faith and persistence.

If you give up too early, you might never experience the gifts you were meant for.

I’m glad I didn’t give up too early, too, despite much desire to do so early on.

And so in the New Year, I want to tell you that so much can be possible beyond the realm of what you or others expect and settle for.

This is the lesson I take away from working with Chris, and a gift I want to bring with us into the New Year.